A New King Takes the Throne

The global press devoted much of September to covering the life and funeral services of the late Queen Elizabeth II. At the time of her passing, she had ruled the United Kingdom for 70 years and seven months, surpassing the previous record of 63 years and seven months set by her great-great-grandmother, Queen Victoria. Notably, Elizabeth II was also the second-longest reigning monarch in the history of the world.

Historian Andrew Roberts has opined that Elizabeth “gave us a sense of calm and stability in 70 years, which have actually been pretty difficult at times for Britain,”[1] including the transition from Empire to the Commonwealth of Nations. Throughout her reign, the queen remained a decidedly non-political figure who transcended all partisanship.

But with the Empire long in the rearview mirror, Her Majesty’s passing has afforded commentators an opportunity to question the value of monarchy in the 21st century. At the end of the day, does the new king have much to offer the modern world? Why bother with the crown if you have leadership in Parliament and Downing Street?

A similar question could have been raised in the capital markets over the past few years. The old adage may have claimed that “Cash is king,” but in a world of near-zero short-term interest rates, rising inflation and buoyant stock markets, who needed it? Everyone “knew” that bonds, not cash, were the primary ballast for any diversified portfolio. That is until this year, anyway.

Barring a massive decrease in yields over the next three months, 2022 will be the year that finally breaks the stock down, bonds up pattern. Rattled by high inflation readings and Federal Reserve hawkishness, Treasury bonds have sold off violently. On September 28, Treasury ten-year yields climbed above 4%, their highest level since October 2008. The Barclays Aggregate Bond Index was down 4.7% for the quarter and is down 14.4% year to date. That is nearly five times worse than the worst year in at least four decades. (As our readers will recall, we have consistently been warning on bonds since January 2021.) 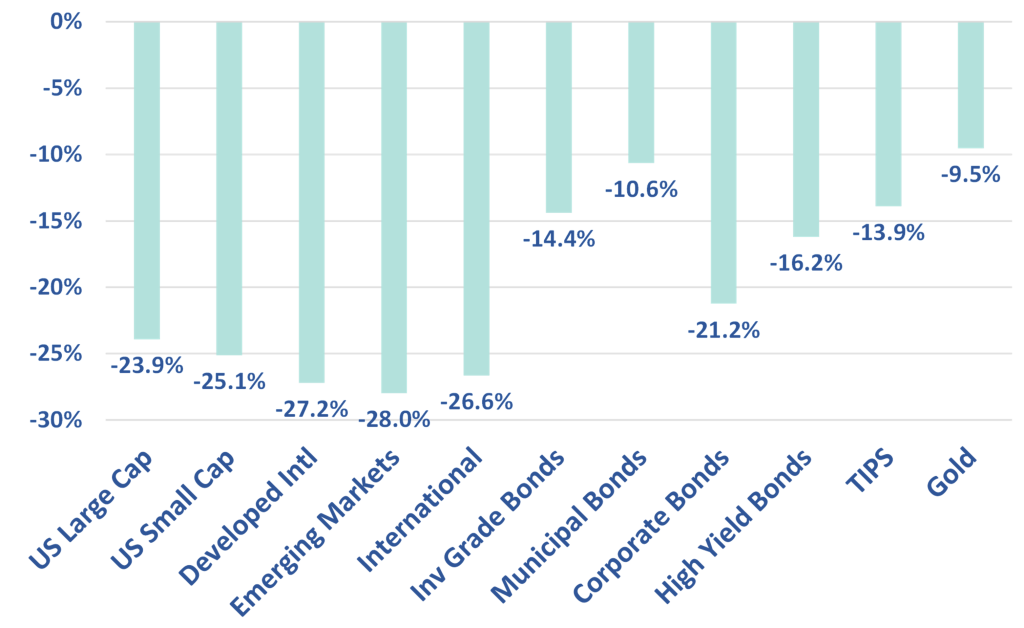 After a six-week rally at the start of the quarter, the S&P 500 dropped 16% since mid-August, finishing the quarter down 5%. The index is down 24% YTD. All sectors save consumer discretionary and energy posted negative returns. Notably, energy is the only U.S. stock sector to have positive returns in 2022 (34%). Growth stocks fared a bit better than value stocks during the quarter, though their performance since January 1, is much worse.

As the Federal Reserve (the Fed) has been tightening monetary policy at a faster pace than other central banks and U.S. short-term rates are higher than most developed-world countries, the U.S. dollar has rallied considerably versus other currencies. Consequently, international stocks have fared slightly worse than American stocks, down 11% for the quarter and 27% so far in 2022. 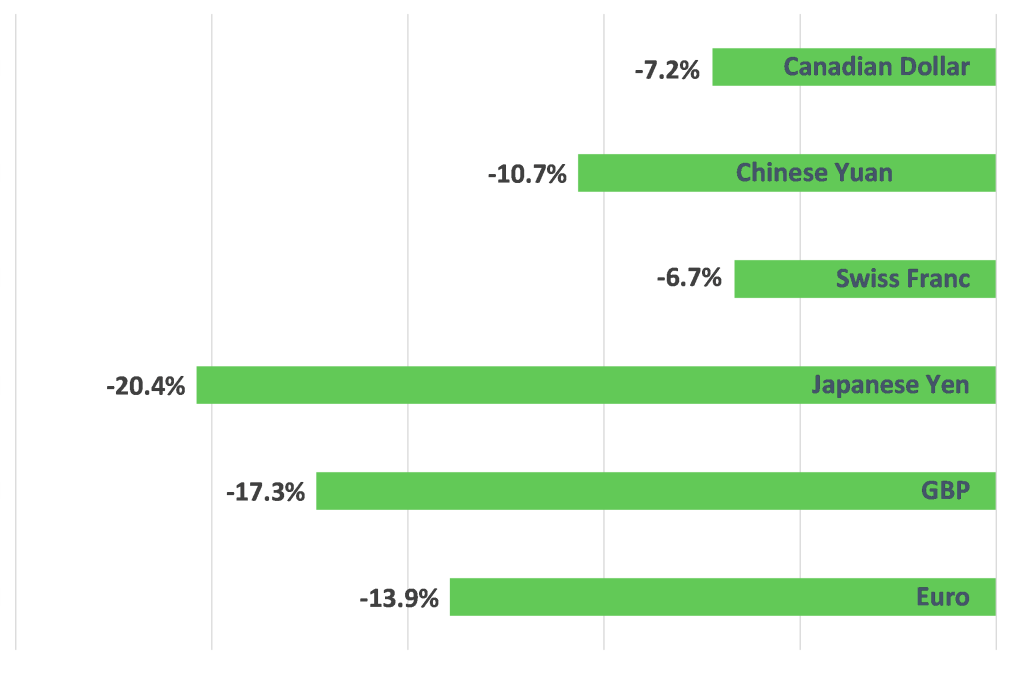 Commodities lost 5% during the quarter as the economy slowed and interest rates increased. The Bloomberg Commodity Index is still up 14% for the year. Even home prices finally started to show some weakness as 30-year mortgage rates are now in the 7% range, their highest level since the Global Financial Crisis.

As we survey the declines across capital markets, it’s tempting to claim that everything is down. But as Albert Einstein demonstrated, everything is relative. So, although we could say that all assets have dropped against the greenback, we could also say that the U.S. dollar has climbed against every other asset class this year (barring private real estate). But regardless of the vantage point, cash is the undisputed king of 2022. And it’s been coronated by none other than the Federal Reserve.

In his September 21 press conference, Fed Chairman Jay Powell expressed the most hawkish rhetoric since assuming his office, “What we hear from people when we meet with them is that they really are suffering from inflation. And if we want to set ourselves up, really light the way to another period of a very strong labor market, we have got to get inflation behind us. I wish there were a painless way to do that, there isn’t. So, what we need to do is get rates up to the point where we’re putting meaningful downward pressure on inflation, and that’s what we’re doing.”

While financial markets had long become accustomed to an almost-permanently dovish Fed since 2008, they have recently begun to take Powell’s rhetoric seriously. At this point, there is only a 0.2% disconnect in the Fed’s projections for short-term rates in December 2022 and the market’s own prediction. Futures markets are now predicting that rates will top out at 4.9% in May 2023, before falling modestly to 4.7% by year-end.

For the time being, the labor market is accommodating the aggressive Fed. The number of Americans filing new claims for unemployment benefits recently fell to a five-month low as the national unemployment rate edged down to 3.5% in September. (The rate was as high as 4.0% in January.) The Fed’s median unemployment projection is 4.4% for both 2023 and 2024.

Concurrent with the higher unemployment forecast is a lower expectation for economic growth. The Fed now anticipates GDP growth of only 0.2% in 2022 and 1.2% in 2023. Several indicators corroborate the Fed’s view. Mortgage applications for new purchases are the lowest since the first lockdown in 2020. Corporate earnings have begun to display weakness as the massive pandemic spending is now kicking into reverse, and inventory shortages turn into sudden surpluses. Global personal computer shipments dropped nearly 20%, the steepest decline in over twenty years.

With ten-year Treasury yields in the 4% range, U.S. stocks are reasonably valued by comparison (roughly 18 times trailing earnings, or an earnings yield of 5.5%). However, we expect continued wage pressure, higher borrowing costs, a stronger dollar and slowing economic growth to weigh on corporate earnings over the next several quarters. Notably, FedEx withdrew its full-year earnings guidance and announced significant cost-cutting measures following softness in global volume of shipments.

In addition to earnings pressures, stocks are unlikely to find solid valuation footing until bond market volatility subsides. That won’t happen until inflation begins to taper off and/or the labor market displays meaningful weakness, because either of those events would provide a catalyst for easier monetary policy.

With September inflation numbers running hotter than expected (core consumer prices and producer prices rising at 6.6% and 8.5% year over year, respectively) and unemployment well below 4%, a data-dependent Federal Reserve should remain in tightening mode for the foreseeable future. So long as those conditions remain, we are structuring portfolios with the following biases:

2022 earnings estimates may not have sufficiently accounted for inflationary and recessionary effects and higher interest rates could continue to pressure stock valuations. With that said, we believe that now is a good long-term entry point into value stocks, particularly mid- and small-cap shares.

Whatever America’s problems, it has emerged from the pandemic strong relative to other countries. China continues to enforce Covid lockdowns while Europe heads into recession amidst the Ukraine war and a major energy and electricity crisis. Lastly, continuing U.S. dollar strength has made foreign stocks’ returns more negative to American investors. (In what is perhaps an inauspicious start for the reign of the new British monarch, the pound has fallen to an all-time low versus the U.S. dollar.)

Given the flattest yield curve in at least 20 years, hot inflation readings, continued negative real interest rates and a hawkish Fed, it makes little sense to own longer-term bonds. Investors seeking a bit of yield would do well to consider very short-term, high-quality corporate bonds. Yield premiums are elevated, even for A-rated bonds with minimal default risk.

While precisely timing a market bottom is difficult (if not impossible), the structural lows for stocks and bonds are unlikely to materialize until the end of tightening is closer in sight. Since stocks are reasonably priced, but not deeply discounted, we are neither aggressive buyers nor sellers. At the margin, we are mitigating risk for our clients by holding floating-rate Treasury bonds until inflation cools and the Fed turns dovish. In the meantime, cash is likely to continue its short-term rule.

Please reach out to us if you’d like to discuss capital markets or your personal financial plan.

Disclosures: This material is for informational purposes only and is not rendering or offering to render personalized investment advice or financial planning. This is neither a solicitation nor a recommendation to purchase or sell an investment and should not be relied upon as such. Before taking any action, you should always seek the assistance of a professional who knows your particular situation for advice on taxes, your investments, the law or any other matters that affect you or your business. Although Lighthouse Wealth has made every reasonable effort to ensure that the information provided is accurate, Lighthouse Wealth makes no warranties, expressed or implied, on the information provided. The reader assumes all responsibility for the use of such information.

Lighthouse Wealth Management (Lighthouse) is registered with the state of Pennsylvania as a Registered Investment Advisor. Lighthouse is not rendering or offering to render personalized investment advice or financial planning advice through this media. This media is limited to the dissemination of general information on the advisor's service offerings and provides for an efficient mechanism in which a prospective client may contact Lighthouse. Advice may only be rendered after the delivery of a disclosure statement, the execution of an investment advisory and/or financial planning contract by the client and the advisor, and the payment of the investment advisory fee by the client to the advisor.